Search all of the homes for sale in Myers Park, Charlotte, NC. If you would like more information on any of these real estate listings, just click the "Request More Information" button when viewing the details of that property. You can also "Schedule a Showing" if you are ready to go see a home.

Use the tools on this website to save your favorite Myers Park, Charlotte, NC homes, share them with others or refine your search. Simply click the "Refine Results" button to get started.

And, if you haven't already, be sure to register for a free account so that you can receive email alerts whenever new Myers Park, Charlotte, NC listings come on the market.

Helen Adams Realty
Based on information submitted to the MLS GRID as of May 16, 2022 11:45 AM EST. All data is obtained from various sources and may not have been verified by broker or MLS GRID. Supplied Open House Information is subject to change without notice. All information should be independently reviewed and verified for accuracy. Properties may or may not be listed by the office/agent presenting the information.

Myers Park homes for sale were special the 1910's. They are still special a hundred years later...  and highly prized.

Developed to draw the city’s wealthiest citizens to the edge of town, it succeeded to the extent that some observers called Myers Park “the finest unified suburban development south of Baltimore." The innovative street layout was created to discourage through-traffic and to ensure the residents’ privacy. Some streets were grand boulevards while others were narrow streets to “merely lead to the home."

The classic Myers Park homes – with heavy influence of Colonial Revival, Bungalow & Tudor Revival - have created a streetscape for all to admire. Most of the homes have been updated several times and many have grown with additions & alterations. During the boom 2000's a wave of “tear downs” made way for newer and often much bigger homes…best described as traditional, upscale & expensive.

Given the high regard for Myers Park and Myers Park homes, the demand often exceeds the supply – resulting in high prices and low inventory. It has always been home to successful people of all stripes. 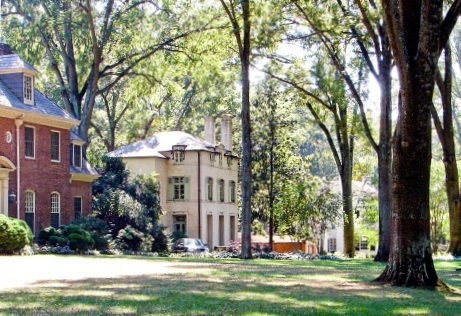 While Myers Park real estate was originally on the outer edge of the city, today its location is better described as on the inner edge of the Charlotte Downtown. In fact some of Charlotte’s recent urban development – commercial and residential – borders Myers Park. It is five minutes from Downtown Charlotte and adjacent to some of the city’s dining on East Boulevard and Providence Road. Also adjacent are the region’s largest hospitals – Carolinas Medical Center and Presbyterian Hospital – which have literally grown into Myers Park.

Before Charlotte’s growth period and during a period of neglect, a 1960 zoning plan rezoned a large part of Myers Park real estate and adjoining suburbs for multifamily high-rise, office and commercial development, as many of the first generation homeowners were passing on. However, this was halted in the mid-seventies, leaving Myers Park with the remnants of multi-family and commercial properties. Today the residents fiercely fight all development projects which might in any way affect the residential character of the community.

Public Myers Park schools are considered some of the best in Charlotte-Mecklenburg Schools (CMS). All schools are fairly new with a motivated staff…constantly challenged by active & concerned parents.

All Myers Park home buyers with children in school are advised to conduct their own research into potential schools before making an Offer to Purchase. This should include a visit to the school(s), in addition an analysis of all available information. The NC School Report Card provides an excellent picture of a school’s ranking in the state and district.

I would be delighted to share my in depth knowledge of the Myers Park real estate market. Should you have any questions regarding Myers Park homes for sale or to market your home, call me anytime at 704-968-0547.